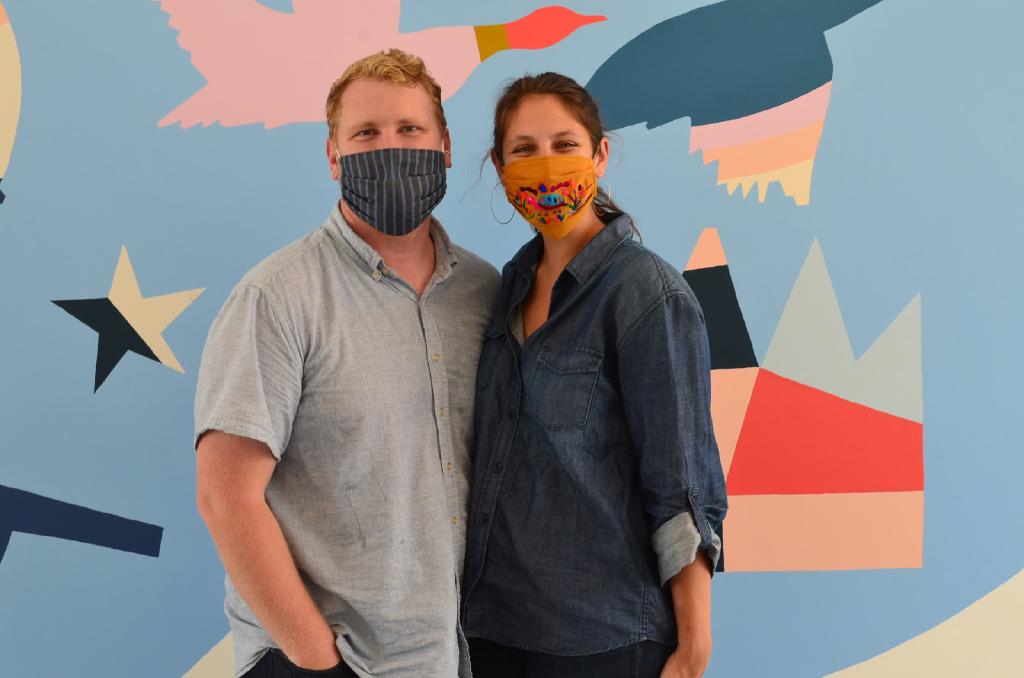 I have known Mr. and Mrs. McAfee for a while because they both taught at Edison Preparatory when I was a student there. Mr. McAfee taught 8th grade history and coached cross-country, and Mrs. McAcfee taught 7th grade English.

In September of 2019, Eleanor’s Bookshop competed for a storefront in the SHOPs at Mother Road Market located along Route 66. Today their vision for their bookstore is a reality. On July 31st I got to spend some time with Kelsey and Matt McAfee, and I was able to interview them about how the dream of their bookstore became a reality.

Sara Allen: Tell me about the story behind the name. Who is Eleanor?

Kelsey McAfee: Eleanor as in Eleanor Roosevelt. We find her to be extremely inspiring. We both really appreciate the advice that she offers and her commitment to young people as well.

Matt McAfee: And we thought that “bookshop” sounded more kid-friendly then “bookstore.” Eleanor’s Bookshop is what we landed on. It was probably the last thing that we had decided on. We had everything else figured out of what we were going to do. We were just not 100% sure about the name. [Kelsey] said “Eleanor’s Bookshop,” and it just sounded right.

SA: What led you guys to want to start a bookstore?

KM: We had taken this long road trip to Charleston. We kind of talked the whole way back about how it was maybe something that is a sooner rather than later opportunity. The business competition came up with the Lobeck Taylor Family Foundation. That seemed intriguing. It was something that we wanted to do regardless, but I think that kind of opened up one particular window.

SA: [Matt], I remember you showing us those [“souvenir”] books in class.

MM: Yes! We had thought about doing it when we came back from that trip from Charleston. We talked about it on the drive back. We started looking around for places and found a place that had a lease ready to sign. [Then], we saw the business competition. That’s what led us over here to the [Mother Road] Market. [Actually], that’s when we put the name down. We put the name down for the business competition and we got told that we were a finalist. That got us started on this journey.

SA: Tell me about the behind the scenes. What software do you guys use?

KM: Basil. Matt did a lot of that work, finding everything that we needed. [Matt] knew all of the different systems before we were going to be using them. It is a lot more computer work. Historically, the business is a lot more catalog based. Now we are going through everything on a computer. We are getting emails, and communicating with ourselves that way to help us pick the books and pick the inventory. Ultimately, there is just an infinite number of titles to choose from. There are certain things that are already popular that are easy picks. The most fun is going through and picking those books that are really special to us. [For example], going through and finding out who published The Camping Trip That Changed America and making sure we carry that specific title. It’s a little research project of its own. Every book in here has its own story in that sort of way. It wasn’t something that we picked willy-nilly. It’s something that’s been searched for and gone through.

SA: What’s a typical day like for you guys?

MM: I think it probably starts with a package. We get a package almost every day of new books. That begins by opening that up. We check everything through. It has a packing list to make sure everything is accounted for. We find a place for them on the shelf.

KM: I would say that the packages and shipments are probably our most consistent form of business every day. We’re ordering books all the time as well. We are hosting appointments, but customers walk in from time to time in between appointments. Some days we are working really heavily on financial stuff, [and] some days it’s a lot of emails. We attended this virtual children’s book conference for a couple days. That was really neat to be able to hear from authors and hear what was going on.

SA: Where do you guys order books from? Do you order directly from the publisher or is there a 3rd party?

MM: It’s honestly a very complicated system. There’re several pieces to it. Essentially, there is a publisher that publishes these books. Kelsey is able to pick them out. The process is what gets tricky between having the different pieces of the puzzle [and] organizing the actual order process to make it an electronic order. Once we get everything into place, it’s simple. We can place it online. Like she said, the software part is complicated.

KM: If there is ever a book that we don’t have a relationship with that particular publisher, there are 3rd party systems that we could go through to order. It’s kind of everything he said.

SA: Okay last questions: What are you currently reading? Do you have any recommendations?

KM: I actually just finished this book called The Road to Santiago. It is a young adult book about [a boy] who is eleven or twelve. He is traveling from Mexico. He crosses the border with this woman who he kind of meets along the way. They have this really adorable relationship. It’s a modern story, so things turn for the worst. It was just excellent storytelling. That’s what I just finished in terms of young adult literature. I’m trying to think of recommendations. The Scythe series have been really popular. It’s like the Hunger Games and it’s dystopian nature. I think readers of the Hunger Games would really like it. As an English teacher, the vocabulary is excellent. There are a lot of really interesting words.

MM: The book I am currently reading (it’s about to come out) is called Midnight Sun. It’s the next in the series for the Twilight Saga. When I was in high school [the Twilight series] was getting pretty popular. Then, it turned into movies. That book arrived in one of those packages. We have to hold on to it till we can sell it on its publish date. That’s one of the perks of doing this. We can be the first ones to read it. My recommendation is anything by Jason Reynolds. In terms of our children’s books, I really like Eric Carle. My favorite book in the store right now is Goodnight Tulsa. It’s actually written by Tulsa teachers and every time a book is purchased one goes to a Tulsa classroom. It’s a really cool story told about Tulsa and it’s a really cool play off the classic children’s book Goodnight Moon.